Asia is the second-largest region of birth for U.S. immigrants, after the Americas, and since 2013 India and China have been the leading origin countries, displacing Mexico. Looking forward, arrivals from Asia are projected to comprise a greater share of all immigrants, becoming the largest foreign-born group by 2055, according to Pew Research Center estimates. In 2019, India, China, and the Philippines were the top origin countries of immigrants from Asia. While the majority of pre-1965 immigrants from Asia were low-skilled laborers, the foreign-born from the region today are more likely than the overall U.S.-born and immigrant populations to earn higher incomes, to work in management occupations, and to be highly educated, although these trends vary by country of origin. Distribution by Region and Country of Origin

Asian migration to the United States, especially from South Eastern and Eastern Asia, grew rapidly between 1960 and 2019 (see Figure 2). The number of immigrants from South Central Asia also rose sharply since 2000, partly due to the inclusion of former Soviet Union countries (e.g., Uzbekistan and Kazakhstan) previously classified as Europe. Meanwhile, the number of Western Asian immigrants in the United States has grown steadily, but at a slower rate. 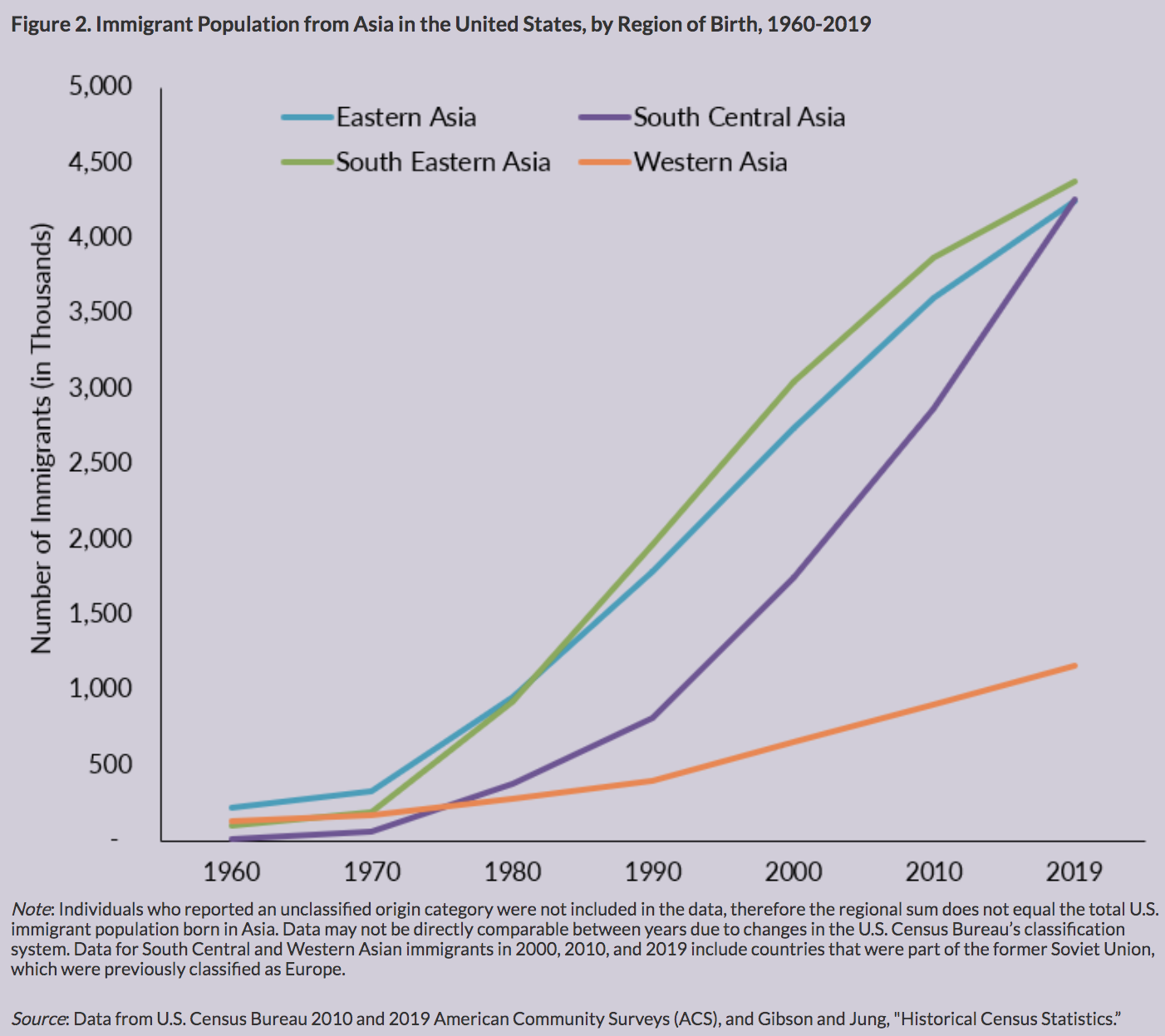 In 2019, South Eastern Asia accounted for the largest share of the total Asian immigrant population (4.4 million), followed closely both South Central Asia (4.3 million) and Eastern Asia (4.2 million), and then by Western Asia (1.2 million)

The largest countries of origin were India (2.7 million, or 19 percent of Asian immigrants); China, including Hong Kong (2.5 million, 18 percent); the Philippines (2 million, 15 percent); Vietnam (1.4 million, 10 percent); and South Korea and North Korea (1 million, 7 percent), which the U.S. Census Bureau combines in its published data although the vast majority of the Korean Peninsula’s immigrants come from South Korea. Together, these countries accounted for almost 70 percent of the total Asian immigrant population in 2019. These countries were also among the top ten origin countries of all immigrants, representing one-fifth of the total U.S. foreign-born population. The Migration Information Source offers Spotlights for several Asian countries, including for immigrants in the United States from India, China, the Philippines, Vietnam, and Korea.

Distribution by State and Key Cities

Close to half (48 percent) of immigrants from Asia have settled in three states: California (30 percent), New York (9 percent), and Texas (8 percent). The top four counties with immigrants from Asia were Los Angeles, Santa Clara, and Orange in California, and Queens in New York. Together, these four counties accounted for about 19 percent of the total Asian immigrant population in the United States. In the 2015-19 period, the U.S. cities with the largest number of immigrants from Asia were the greater Los Angeles, New York, and San Francisco metropolitan areas. These three metro areas accounted for approximately 31 percent of the Asian-born population residing in the United States.

Compared to the overall foreign-born population, immigrants from Asia are more likely to be proficient in English but less likely to speak English at home. In 2019, approximately 42 percent of immigrants from Asia (ages 5 and over) reported limited English proficiency, compared to 46 percent of all immigrants. Those from Eastern Asia were the most likely to be Limited English Proficient (LEP), at 53 percent, followed by immigrants from South Eastern Asia (45 percent), Western Asia (37 percent), and South Central Asia (29 percent). The Asian-origin countries with the highest share of LEP individuals were Myanmar (71 percent), Vietnam (65 percent), Laos (62 percent), and Uzbekistan and Cambodia (59 percent each). Asian-origin countries with the lowest share of LEP individuals were Israel (15 percent), India (22 percent), and Lebanon and the Philippines (28 percent each).

Approximately 13 percent of immigrants from Asia spoke only English at home in 2019, versus 16 percent of all immigrants. The top ten foreign languages spoken by Asian immigrants are Chinese (including Mandarin and Cantonese), Tagalog (including Filipino), Vietnamese, Korean, Hindi, Arabic, Urdu, Telugu, Persian (including Farsi and Dari), and Gujarati. Note: Limited English proficiency refers to those who indicated on the ACS questionnaire that they spoke English less than “very well.”

Immigrants from Asia participate in the labor force at a slightly lower rate than the overall immigrant population, but a slightly higher rate than the native born. In 2019, about 65 percent of immigrants ages 16 and over from Asia were in the civilian labor force, compared to 67 percent and 62 percent of foreign- and U.S.-born individuals, respectively. More than half (53 percent) of Asian immigrants were employed in management, business, science, and arts occupations—a much higher share than the overall foreign- and U.S.-born populations (see Figure 6). In contrast, immigrants from Asia were also much less likely to be employed in natural resources, construction, and maintenance occupations (3 percent).

MPI estimated that approximately 110,300 youth and young adults from Asia were immediately eligible for the Deferred Action for Childhood Arrivals (DACA) program in 2020, which provides temporary relief from deportation as well as work authorization. As of December 31, 2020 (the latest data available from the U.S. government), 636,400 unauthorized youth and young adults had active DACA status, including immigrants from South Korea (6,030), the Philippines (3,190), India (2,150), Pakistan (1,110), and Indonesia (630).